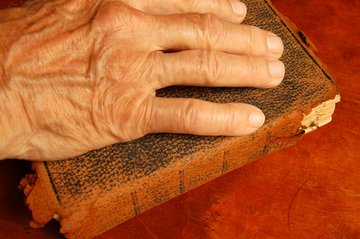 To the Church in Smyrna

8 “To the angel of the church in Smyrna write:

These are the words of him who is the First and the Last, who died and came to life again. 9 I know your afflictions and your poverty—yet you are rich! I know about the slander of those who say they are Jews and are not, but are a synagogue of Satan. 10 Do not be afraid of what you are about to suffer. I tell you, the devil will put some of you in prison to test you, and you will suffer persecution for ten days. Be faithful, even to the point of death, and I will give you life as your victor’s crown.

11 Whoever has ears, let them hear what the Spirit says to the churches. The one who is victorious will not be hurt at all by the second death.

12 “To the angel of the church in Pergamum write:

These are the words of him who has the sharp, double-edged sword. 13 I know where you live—where Satan has his throne. Yet you remain true to my name. You did not renounce your faith in me, not even in the days of Antipas, my faithful witness, who was put to death in your city—where Satan lives.

14 Nevertheless, I have a few things against you: There are some among you who hold to the teaching of Balaam, who taught Balak to entice the Israelites to sin so that they ate food sacrificed to idols and committed sexual immorality. 15 Likewise, you also have those who hold to the teaching of the Nicolaitans. 16 Repent therefore! Otherwise, I will soon come to you and will fight against them with the sword of my mouth.

17 Whoever has ears, let them hear what the Spirit says to the churches. To the one who is victorious, I will give some of the hidden manna. I will also give that person a white stone with a new name written on it, known only to the one who receives it.

18 “To the angel of the church in Thyatira write:

These are the words of the Son of God, whose eyes are like blazing fire and whose feet are like burnished bronze. 19 I know your deeds, your love and faith, your service and perseverance, and that you are now doing more than you did at first.

20 Nevertheless, I have this against you: You tolerate that woman Jezebel, who calls herself a prophet. By her teaching she misleads my servants into sexual immorality and the eating of food sacrificed to idols. 21 I have given her time to repent of her immorality, but she is unwilling. 22 So I will cast her on a bed of suffering, and I will make those who commit adultery with her suffer intensely, unless they repent of her ways. 23 I will strike her children dead. Then all the churches will know that I am he who searches hearts and minds, and I will repay each of you according to your deeds.

24 Now I say to the rest of you in Thyatira, to you who do not hold to her teaching and have not learned Satan’s so-called deep secrets, ‘I will not impose any other burden on you, 25 except to hold on to what you have until I come.’

26 To the one who is victorious and does my will to the end, I will give authority over the nations— 27 that one ‘will rule them with an iron scepter and will dash them to pieces like pottery’ just as I have received authority from my Father. 28 I will also give that one the morning star. 29 Whoever has ears, let them hear what the Spirit says to the churches.