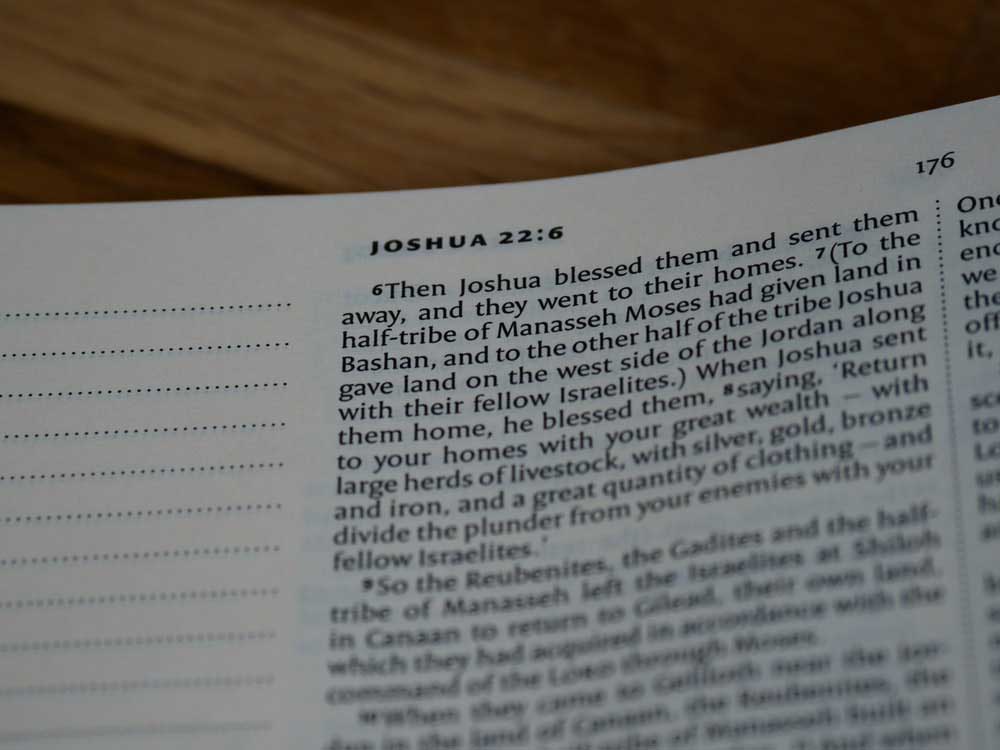 4When the entire nation had finished crossing over the Jordan, the Lord said to Joshua: 2‘Select twelve men from the people, one from each tribe, 3and command them, “Take twelve stones from here out of the middle of the Jordan, from the place where the priests’ feet stood, carry them over with you, and lay them down in the place where you camp tonight.” ’ 4Then Joshua summoned the twelve men from the Israelites, whom he had appointed, one from each tribe. 5Joshua said to them, ‘Pass on before the ark of the Lord your God into the middle of the Jordan, and each of you take up a stone on his shoulder, one for each of the tribes of the Israelites, 6so that this may be a sign among you. When your children ask in time to come, “What do those stones mean to you?” 7then you shall tell them that the waters of the Jordan were cut off in front of the ark of the covenant of the Lord. When it crossed over the Jordan, the waters of the Jordan were cut off. So these stones shall be to the Israelites a memorial for ever.’

8 The Israelites did as Joshua commanded. They took up twelve stones out of the middle of the Jordan, according to the number of the tribes of the Israelites, as the Lord told Joshua, carried them over with them to the place where they camped, and laid them down there. 9(Joshua set up twelve stones in the middle of the Jordan, in the place where the feet of the priests bearing the ark of the covenant had stood; and they are there to this day.)

10 The priests who bore the ark remained standing in the middle of the Jordan, until everything was finished that the Lord commanded Joshua to tell the people, according to all that Moses had commanded Joshua. The people crossed over in haste. 11As soon as all the people had finished crossing over, the ark of the Lord, and the priests, crossed over in front of the people. 12The Reubenites, the Gadites, and the half-tribe of Manasseh crossed over armed before the Israelites, as Moses had ordered them. 13About forty thousand armed for war crossed over before the Lord to the plains of Jericho for battle.